Saturday the 9th of February was The YA Room’s spectacular YA Day at The Wheeler Centre (thanks also to Writers Victoria), where fifteen authors across five different panels shared their expertise and anecdotes about the YA industry. It was the first time I’d been to the event and I came away with so much inspiration, admiration & a significant chunk of money missing from my bank account because of course I had to buy ALL the amazing books. 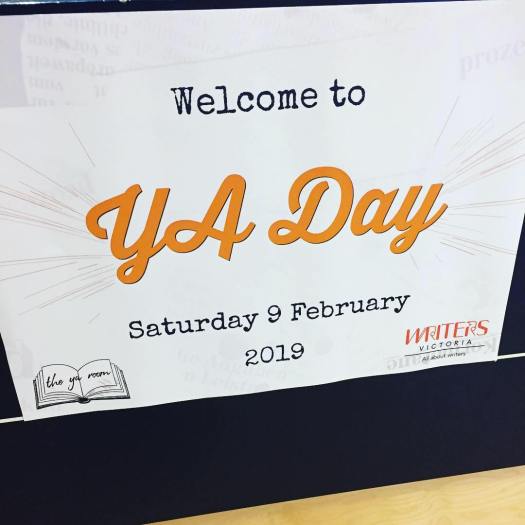 Every author had a lot of great things to say so I’ve consulted my scribbly notes & put together some writing gems that I found interesting and helpful.

*Willy Wonka singing voice* “Come with meeee, and you’ll beeee in a world of writer informaaaation…” 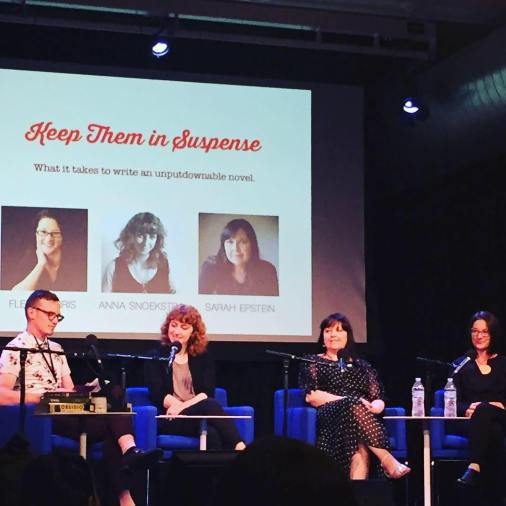 Anna Snoekstra (author of ‘Mercy Point’, ‘The Spite Game’ +more) always has a location in mind first when she writes – it’s a character all of its own. Anna also uses a lot of visual representation when plotting her stories, colour coding, graphs etc. to really help her to externalise everything. A trope Anna appreciates is the good old unreliable narrator to amp up the tension & also one Sarah Epstein loves, which is a misfit band of people coming together and forming a bond with each other.

Sarah Epstein (debut author of ‘Small Spaces’) tries to come up with a log line for the scenes she imagines to see if they have a good enough hook or not for a whole novel. She also says the ‘rule of 3’ comes in handy when you’re peppering hints through your mystery/thriller, but also planting a red herring right after a real clue is a great way to keep the reader on their toes.

Fleur Ferris (author of ‘Risk’, ‘Wreck’ +more) plots her novels out like a movie in her mind. Random scenes are visualised and then it all eventually connects cohesively. Fleur says that a good way to build suspense is to have contrasting character perceptions: if characters come from different backgrounds they’re going to have dissimilar and therefore interesting opinions.

Panel 2 – It’s alive!
“Insider tips and tricks on how to get published” 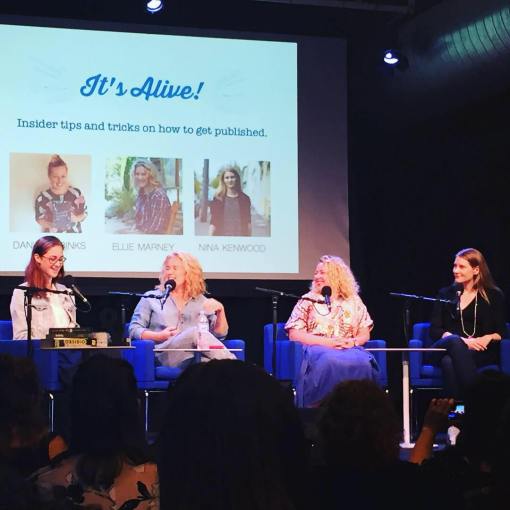 Ellie Marney (author of the ‘Circus Hearts‘ trilogy, ‘White Night‘ +more) says that after the intensity of a book release day, you spend a lot of time on self promotion and admin (like online Q&As, answering emails etc). Ellie also says that once your collection of work starts to grow it can be useful to diversify what genres and categories you write in to reach a larger audience. The one key point Ellie says to remember when submitting your MS is to follow the submission guidelines to the letter, “they’re there for a reason!”

Danielle Binks (contributing author & editor of ‘Begin, End, Begin: A #LoveOzYA Anthology‘ & literary agent at Jacinta di Mase) says that when you’re looking for an agent it can be useful to read the acknowledgement section of books you like to see who’s mentioned. Dani’s also a big fan of the elevator pitch & wants to know two main things about your MS: what are you trying to say? And what is your character trying to say? Another great “hook” for your MS is to say it’s “this meets this” (e.g. ‘It’s The Breakfast Club meets ‘Indiana Jones‘) so people can get an immediate understanding.

Nina Kenwood (winner of the 2018 Text Prize for her upcoming YA debut ‘It Sounded Better In My Head‘) is currently the marketing manager at Readings bookshop. She says that browsing what’s on the shelves is great in discovering what different publishers are putting out and who might be the right fit for you. Nina says that entering the Text Prize was fantastic because it made her commit to a deadline. She also says to always be polite because the publishing industry is so small in Australia, and to also make sure you respect people’s time & as Ellie mentioned, follow submission guidelines properly!

Astrid Scholte (debut author of YA fantasy ‘Four Dead Queens‘ out March 4th 2019) says as a first-time author it’s good to keep tabs on what’s in the YA market, especially when you’re sending out your MS, so you know what the publishers already have. 4DQ is a murder mystery set in a fantasy world with multiple queens ruling one nation and Astrid really wanted all of the women supporting one another. When it comes to plotting out things, Astrid “drip-fed” information throughout the book, but the story can also reach a breakneck speed because of the murder mystery element.

Jodi McAlister (author of the ‘Valentine‘ series including the just released third instalment ‘Misrule‘) loves to create worlds that are fun to explore – somewhere you’d actually like to visit if you had the means. She also has a big ban on prologues in her writing classes! Jodi says that you need to trust your reader will pick up information along the way (and you also don’t have that connection with your audience right at the beginning so the prologue info-dump is difficult to retain). One thing Jodi wishes she did was keep a series bible from the start so it was easier to keep track of names, places, magical elements etc.

Amie Kaufman (co-author of the ‘Illuminae‘ trilogy, ‘Unearthed‘ duology +more) is certain her weird and wonderful Google history is going to land her in trouble with the CIA one day! She says not to worry about the competition when you’re world building – just find your own take on things. Like if you make a change to something, ask yourself what the consequences would be (e.g. If money doesn’t exist in your story, what happens?). Amie also had an interesting way to stop yourself from getting bogged down with too much exposition in your world building – she said to write a briefing paper for your reader, then pretend they’ve already read it & start your book from there.

Michael Earp (editor of ‘Kindred: 12 Queer #LoveOzYA Stories‘ published June 2019 & contributor to ‘Underdog: #LoveOzYA Short Stories‘ out March 2019) has specific scenes come to mind first when plotting a story and then he thinks more about the characters and their motivation. As a bookseller, Michael has seen firsthand that just because you have a book coming out, it won’t automatically mean a bookshop will stock it so you need to be aware of that & factor in your own publicity. A writing exercise Michael uses to generate short stories is to think of a list of random words & then you can usually construct an interesting plot out of that. (Michael was also wearing my fave t-shirt of the day that said: Hang on. Let me overthink this. Brilliant & same here lol).

Alison Evans (author of ‘Ida‘, the recently released ‘Highway Bodies’, contributor to ‘Kindred: 12 Queer #LoveOzYA Stories’ +more) says that creating can become very addictive and you can become quite burnt out, especially if there’s the pressure of constant creativity. So you need to keep tabs on your mental health and remember to look after yourself. Alison really enjoys working with editors and the guidance they provide, “I’m in love with my editors… I think they know!” And Alison’s short story writing tip is to treat your story as a complete work and not as the first chapter of something.

Katya de Becerra (author of ‘What The Woods Keep‘ & upcoming novel ‘Oasis‘) says that the publishing process starts off very slow and can be quite solitary, and then everything happens really fast! You need to think about your health & have a good life balance. Katya believes that traditional publishing is great because it’s nice to have a team around you that cares, but they do have other books and authors to look after as well so you need to be patient for your turn. When beginning a story, Katya often starts out with a “grain” of an idea and then the creation of characters comes afterwards.

Will Kostakis (author of ‘The Sidekicks‘, ‘The First Third‘ +more) performed a very hilarious reading of a first draft he wrote in his teenage years where the first chapter was titled: “Party of Five without the melodrama” (lol). It also contained rants, reader insults and at least two footnotes – all of which he advised against! In the Word vs. Scrivener debate Will chose the former because he always knows when his book is long enough when Word crashes on him. Will also had a great tip about the editing process: behind every editor suggestion is a problem that still needs to be fixed. So even if you don’t agree with the suggested change you should still work towards finding a solution.

Jay Kristoff (author of ‘The Nevernight Chronicles‘, co-author of the ‘Illuminae‘ trilogy +more) admits that he’s started his books in the wrong place a lot. One time he had 80,000 words written before realising he still hadn’t found the beginning! But he knows none of it is wasted work as you’re still discovering so much about your characters and the world as you go. Jay says that art is so subjective so you should find critique partners that really suit your style of writing. And don’t be afraid of sharing your work because it’s better to find out what’s “broken” in the drafting stage than later down the track! Jay’s also a Word fan because he’s worried he’ll forget how to write if he tries Scrivener!

Lili Wilkinson (author of ‘After the Lights Go Out‘, ‘Green Valentine‘ +more) likes to make a list of ideas that “feel sparkly” when she’s plotting new novels & then pick 3 of the best ones to put together and form a story. Lili shared the opening paragraph from the 1st draft of her novel ‘Scatterheart‘ and then the paragraph that was published. She says there was a large chunk cut out and she ended up with a much punchier beginning. Lili says it’s a developed skill to be able to take editorial feedback on board and not take it to heart. The editors are there to shape your book into the best possible version of itself so she advises authors to listen to the advice the editors are providing. Lili is also very much a Scrivener advocate & has been since its origin!

Thanks to all of the authors for their time, the YA Room crew & all of the lovely panel moderators. Bring on YA Day 2020!

Lots of lovely new books to read ❤️ #theboyfromthemish #garylonesborough @allenandunwin #tigerdaughter #rebeccalim #glassheart #katharineorton @walkerbooksaus #concreterose #angiethomas #thegreatesthit #willkostakis @hachetteaus #loveozya
I visited @torquaybooks for the first time on the weekend & it was so great to browse in a bookshop again! They have such a wonderful selection, particularly the children’s & young adult 💖📚 I bought a few Christmas presents while I was there (for myself... whoops 😂) #bookstagram #torquaybooks #middlegradebooks #youngadultbooks #loveozya #loveozmg
This absolutely made not only my day but my year haha! Excited & grateful 💕 Thank you @jenestorer for all the work you put into Scribbles to make it so much fun. Thank you to all the awesome judges & congratulations every single Scribbler who entered this year, you’re all wonderful 🥳 The biggest of congratulations to @liz_ledden for winning the JF category too - I love the name of your story! 😀🐭
Super thrilled to have made the shortlist for my junior fiction short story ‘Side by Side’ 😊 I always love the Scribbles creative writing awards, but this year in particular it has really helped me find my creativity again. Big congrats & high fives to everyone on the shortlist. And to everyone that entered the comp 🎉🥳💕
Hello my name is Carly and I cannot stop buying books 👋😅 I didn’t realise they’d all be in hardcover too, they’re so nice ✨📚 #loveozmg #thestolenprinceofcloudburst #allenandunwin #jaclynmoriarty #pauljennings #untwisted #thegrandestbookshopintheworld #ameliamellor #affirmpress #middlegradebooks #memoir
It has been a very, very good week for book mail 🥰📚(Can you tell I’ve been coping with the Melbourne lockdown by online shopping? 😅) 📚 #loveozmg #loveozya #howtowritethesoundtracktoyourlife #fionahardy #affirmpress #thefirestar #altait #penguinbooks #theothersideofthesky #amiekaufman #meaganspooner #allenandunwin #noneshallsleep #elliemarney #thefteam #rawaharja #giramondopublishing #theheartsongofwonderquinn #kategordon #uqp #theloststoneofskycity #hmwaugh #fremantlepress